The National Television Awards may have had some stunning dresses and make-up looks, and I may have gotten to talk to some great celebrities, but really the whole event was about the gongs that were handed out during the ceremony. Four US faces came over to help give them out — Zachary Quinto, Nicollette Sheridan, Michael Urie and Paris Hilton — but the winners were all Brits, as voted for by the public. 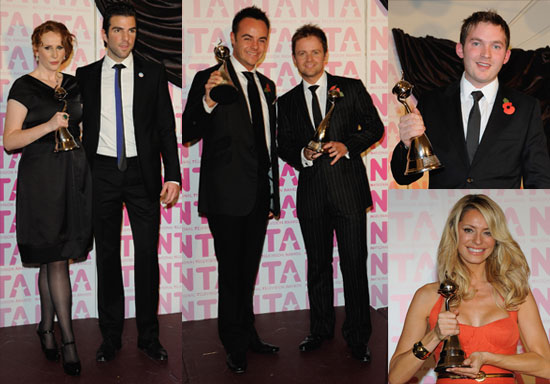 In the press room following each acceptance speech we were visited by the winners. Rita Simons and Matt Littler seemed genuinely shocked and excited about their victories, Paul O'Grady seemed surprised but indifferent to his win in the Most Popular Entertainment Programme category, while Simon Cowell and Ant and Dec were consummate chuffed professionals. David Tennant used his remote acceptance speech to announce he was leaving Doctor Who, and the entire Eastenders cast bounded up to the stage to collect for Most Popular Serial Drama.

To see the full list of winners from last night's ceremony as well as lots more photos from the red carpet and press room, just read more.