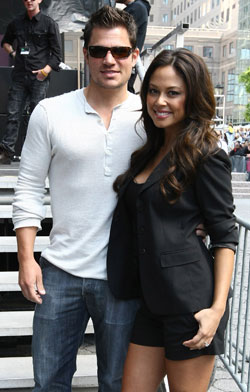 Nick Lachey and Vanessa Minnillo got married this evening in an intimate ceremony on Richard Branson's Necker Island. The couple tied the knot in the Carribbean location in front of 35 guests, who were told little else but that the attire was "island chic." Vanessa chose an intricate Monique Lhuillier gown with an embellished lace corset and a tufted skirt, while the groom wore a Dolce & Gabbana suit. Though other details have been kept underwraps, Nick and Vanessa's wedding will be televised on TLC in a special that's set to air on July 30.

Nick and Vanessa became engaged last November after they began dating in 2006. Congrats to the newlyweds!