We sat down with Orlando Bloom ahead of the UK premiere of The Three Musketeers earlier this month. He made the trip to London from Paris after watching his wife Miranda Kerr walk the runway during Fashion Week. Orlando traveled solo to take care of press for the action film, leaving both Miranda and their son Flynn in the City of Lights. Orlando chatted with us about the movie, being a father, his precious Flynn, and being a family of three. Stay tuned for the full video coming up later this week! 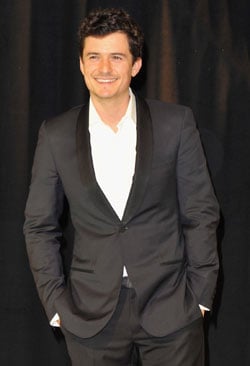 PopSugar: Your wife, Miranda, was pregnant while you were filming this movie, how has life changed since then?

Orlando Bloom: How hasn’t it? I don’t know. That’s a hard one to answer. It’s drastically different. It’s amazing. I always wanted to be a dad.

PS: How do you both juggle parenthood with such busy schedules?

OB: It’s like a juggling act, it’s a big juggling act. We just as much as possible, you know, I go to see her, she comes to see me. We just spend time. She came to see me when I was working on Hobbit in New Zealand and I went to Paris to see her. I can’t be away from him [Flynn] for more than a few days or a week because then I start to jones, because like he’s growing so quickly. We try to keep it as a unit as much as possible.

PS: What do you love most about doing these action movies?

OB: I love the characters that I’ve got to play really. You know I love that I’m kind of living out a boyhood dream in many ways and that my son will get to watch some of these movies tickles me, silly. You know when he’s like 11 years old he’ll probably love The Three Musketeers and hopefully he’ll love all the stuff that I’ve done and he’ll get to go “ohhhh” you know it’s fun. Stack them all up put them in a room and he can just watch them.