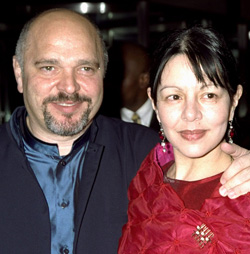 Sad news has been confirmed today – Oscar-winning director Anthony Minghella died this morning. He was 54 years old. A cause has not been released at the time of writing.

The Isle-Of-Wight born filmmaker was best known for directing movies such as The Talented Mr Ripley, Cold Mountain and The English Patient for which he won his Academy Award in 1997. Minghella was filming a short to be part of New York, I Love You, at the time of his death. He recently travelled to Botswana to direct the pilot TV episode of The No 1 Ladies' Detective Agency which is due to be screened this Easter on BBC1. Minghella also served as chairman of the British Film Institute.

Minghella is survived by his wife Carolyn Choa, son Max and daughter Hannah.

UPDATE: Minghella was in hospital last week to have a growth removed. It originally appeared to have gone well, but he died of a haemorrage at 5am this morning.