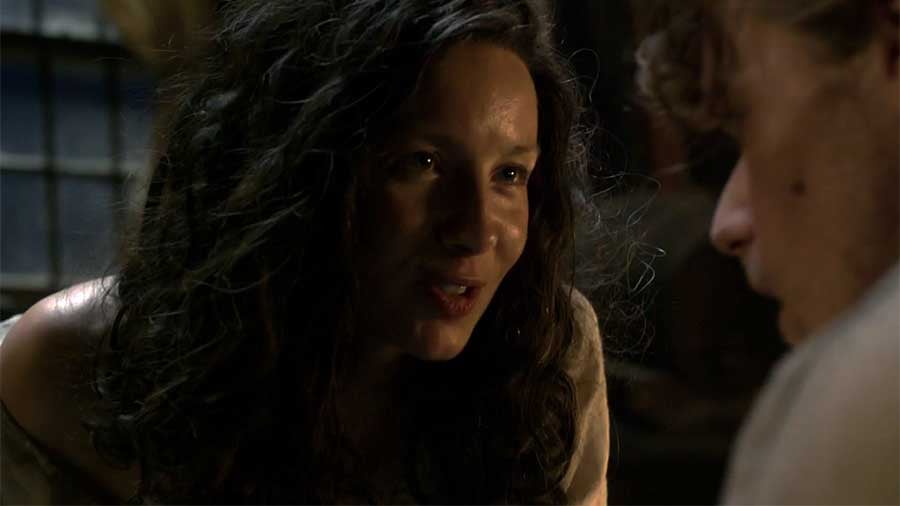 Outlander fans were undoubtedly sending up hearty cheers at the end of the latest episode, "Uncharted," when the writers included a perhaps unexpected treat for book readers: the turtle soup sex scene.

While the print shop reunion may be the most swoon-worthy moment from book three, the turtle soup scene may just be the funniest. In it, Claire has had her arm sliced open by a pirate's cutlass; to stave off the infection that is brewing, she has Jamie give her a shot of penicillin in the behind, then she proceeds to seduce him because she's a little bit drunk on the cooking sherry in Murphy's turtle soup.

With so much content to fit in just 13 episodes — with all that's left to show, we can hardly believe there are only two episodes remaining — the pirate attack and turtle soup scene are easy ones for the writers to omit. In fact, they did cut a significant number of pages out of this most recent episode, greatly condensing Claire leaving Father Fogden's estate, finding Marsali and Fergus, Jamie reappearing on a different ship than the Artemis, and the Artemis subsequently being boarded by pirates, which is where Claire hurts her arm.

On the show, Claire slices her arm while running through the jungle to get to the beach where Jamie and the Artemis have landed. It is revealed via a conversation between Jamie and Fergus that Murphy the cook perished in a storm at sea, and then later, Mr. Willoughby is the one who stitches Claire's arm and prepares the alcoholic turtle soup.

We arrive at the scene where Claire and Jamie are being super cute together, trying to be quiet as Mr. Willoughby (Mr. Stern in the book) asks them how they liked the soup.

Eagle-eyed Twitter users actually knew this scene was coming, since back in April, Caitriona Balfe tweeted out a photo of an injury she incurred while filming it. She doesn't explicitly name the scene, but the emoji of a turtle and a bowl of soup give it away.

It's no wonder she got hurt. The scene looks plenty rough-and-tumble, even if it's just acting. What these people go through to bring our favourite book moments to life!