Wayne Rooney joined his teammates in Basel, Switzerland yesterday for a training session ahead of their Euro 2010 qualifier against the national squad. Fabio Capello put the team through their paces, showing it was business as usual despite the weekend's reports that Wayne allegedly spent seven nights with a prostitute while his wife Coleen was pregnant with their son Kai. Coleen was spotted for the first time since the news broke at her parents' house in Liverpool today. Capello also held a press conference yesterday, and said of Rooney: 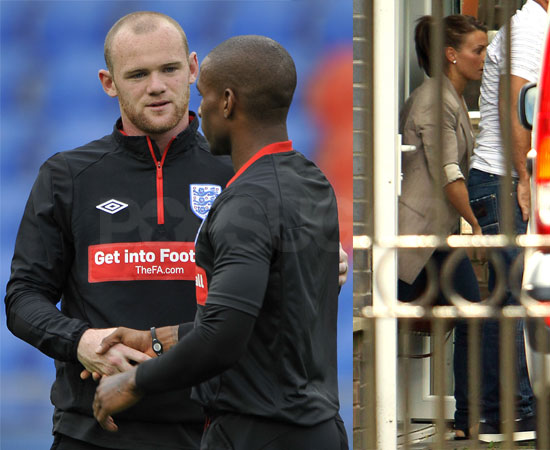 "He will play. I monitored him during training and he was good and focused on the game. I think he forgets any problems he has while he is on the pitch. We've spoken – private things – and it's important he plays. You have to separate, to divide, your private life from your job. You have to be strong to divide the two: living the job really well and finding solutions to the problems [off the pitch] are two different things. My job is the first part. The other part is his problem. I am the manager. They are the players. We have to separate the different moments but I spoke with him and he said he wanted to play against Switzerland and that he is focused."