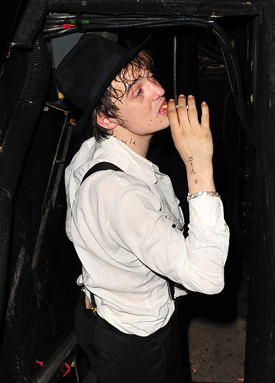 Pete Doherty has been moved to a segregated area of Wormwood Scrubs after prison officers discovered fellow inmates were plotting to attack him.

It is reported that Pete himself asked for the transfer to the high security segregation wing when prison officers told him about the plans.

The singer, who is serving 14 weeks in prison, will share the segregation unit with 15 other inmates.

Yesterday Pete was strip-searched by four guards looking for drugs, following reports earlier in the week that the singer was injecting himself with heroin. The outcome of the search is not yet known.


A Sky News source said that during the search Pete "was quiet. He was calm. But he did seem pale - like Casper the Ghost".

UPDATE: Pete's solicitor, Sean Curran, has confirmed Pete has been segregated for his own safety, but didn't confirm it was due to fellow inmates planning to attack Pete. In relation to reports that Pete would share the segregation unit with 15 other inmates, Sean Curran said: "There may be different parts to the unit, but he's on his own".