Paris Fashion Week has attracted several stars over the last couple of days, with Sonia Rykiel showing her collection on Wednesday to a leather-legginged Milla Jovovich, a full length and fab Dita von Teese, and a silver sparkling Emma Watson. The Yves Saint Laurent show yesterday drew lots of famous faces, from Naomi Campbell in colour of the week grey and Claudia Schiffer in leopard print to Dita and Natalia Vodianova in their black trouser suits. Emma was also there, having attended Giambattista Valli in a colourful creation alongside newly single Natalie Portman, who went for an LBD with statement shoulders. 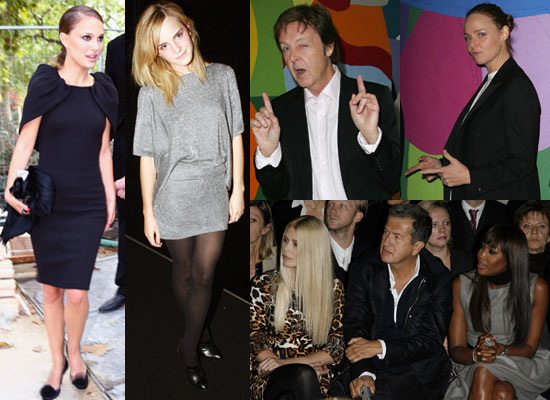 Natalia Vodianova also watched Stella McCartney's show yesterday with Sharleen Spiteri and proud dad Paul McCartney. It looks like Stella's taking after Paul in the crazy posing stakes, and Paul's certainly got a sense of humour as he's agreed to appear in a cameo role on Peter Kay's spoof talent show comedy, airing on 12 Oct.

We've got loads more pictures from the stars in their different outfits at the shows over the last couple of days, so just read more.