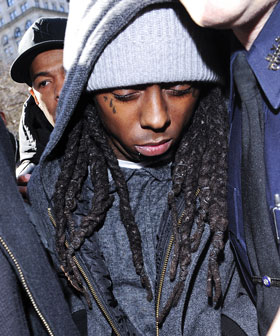 Rapper Lil Wayne attended Manhattan criminal court yesterday and has been sentenced to a year in prison for gun possession charges. There were a couple of delays to his sentencing due to emergency dental work, and a fire at the court.

In 2007 a loaded 40-calibre semi-automatic gun was found on his tour bus and the charges stem from that incident. His lawyer said that he's expected to be separated from other prisoners and held in protective custody while he carries out his sentence at New York's Riker's Island prison. He could be released in eight months for good behaviour.