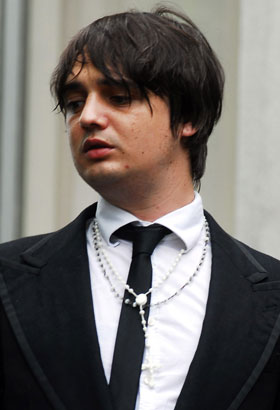 Pete Doherty appeared in court yesterday admitting careless and drink driving after a show in Gloucester, and was banned from driving for 18 months and fined £2050. Pete admitted posession of drugs at a previous hearing and has six previous driving offences and 21 previous drug convictions.

When he entered the court at the beginning of the day, an item that police suspected was a drugs wrap fell from his pocket during a security search. Pete was then taken to a nearby station for questioning after he heard he was being fined and banned from driving for his previous offences.

A police spokesperson made this statement:

"A 30-year-old Wiltshire man has been arrested on suspicion of being in possession of a controlled substance. He is currently assisting police with their inquiries.”