Agyness Deyn took to the catwalk for her best friend Henry Holland's new House of Holland collection at London Fashion Week yesterday. She opened the show, having flown in especially for the occasion from New York, where she lives with her man Albert Hammond Jr. Kanye West, Will Young, Nicola Roberts, Peaches and Pixie Geldof and Remi Nicole were among those who watched her strut down the catwalk, though her backstage ensemble was a little more casual, barring those gold shoes! 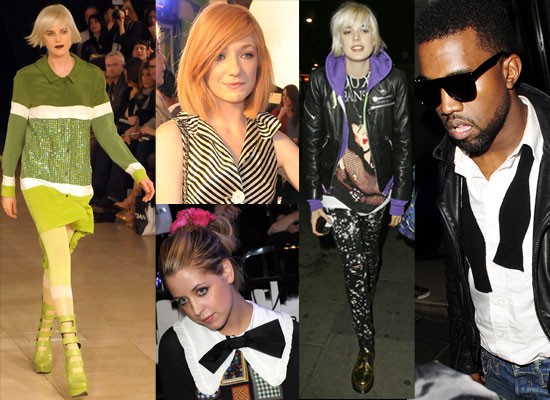 Not only did she wear Henry's clothes during the show, but she also wore them to the aftershow party and then took them to the streets — changing her green show outfit into a fluffy purple jacket and tights for a trip to the newsagents. Judging from their smiles it looks like Agyness, Henry and Remi had a great night!

To see more photos of celebs at the House Of Holland show and afterparty, as well as the fab shots of Agyness in her fluffy coat, just read more.