Alex Reid was crowned winner of Channel 4's last ever Celebrity Big Brother last night! There were five housemates in the final, and Stephanie Beacham was first to leave with only 8.6% of the public voting for her to win. Next out was Basshunter aka Jonas Altberg with 12.8% of the vote. Davina McCall asked him about his relationship with Katia Ivanova, and he said he was over it now, and if Kat did like him it was "too late baby"! The lines reopened to decide third place, which went to Vinnie Jones with 20.2% of the total at that stage. We the public then continued to vote for our winner, with Dane Bowers receiving 34.1% of the final vote and coming second to Alex Reid, who scored a massive 65.9% of votes to be crowned victorious. 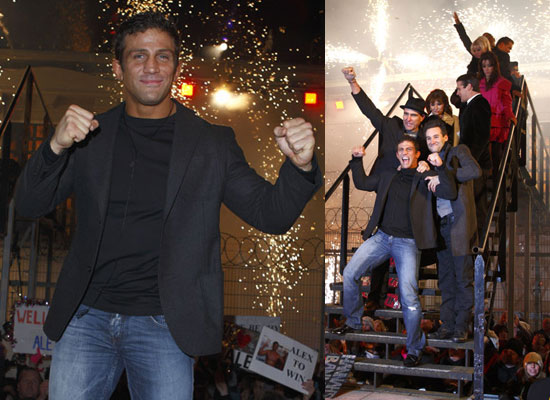 All of the Alex's housemates (except Heidi Fleiss) were at the show last night, as well as his girlfriend. Davina told Alex Katie Price was there and she wanted him to know she loved him. Aww. Kate's been showing her support on Twitter while Alex has been in the house, and making promises for the future, tweeting: "Absence makes the heart grow fonder! our relationship goes beyond big brother ill be waiting with open arms ;)". It looks like this couple will be making the headlines even more in 2010. Are you glad Alex won?

To see more pictures of Alex and all the housemates, just read more.