Last night Mariella Frostrup hosted the British Fashion Awards in London, and a host of celebrity fashion enthusiasts turned up to applaud the winners. My girl FabUK has all the details on the winners, including Model of the Year Jourdan Dunn — who beat Agyness Deyn to the title — and Red Carpet Designer winner Matthew Williamson. The ever stylish Alexa Chung also walked the red carpet in a tribal boho number, as did Sophie Ellis-Bextor who looked classic in her Topshop LBD and white tights. Erin O'Connor also wore a Topshop jacket over her designer gown — it's great to see celebs wearing affordable clothes on the red carpet, don't you think? Other celebs attending the event included Anastacia, Twiggy and her daughter, Pixie Geldof, Roisin Murphy, Claudia Schiffer, Sadie Frost and Jade Jagger. 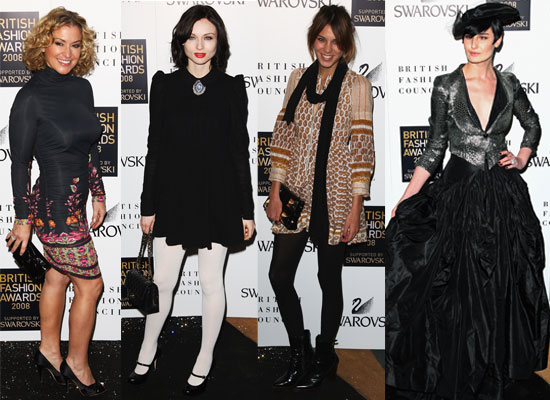 See even more shots of the stars over at InStyle UK!