We've already seen Amanda Seyfried and Dominic Cooper getting cosy at a Tribeca Film Festival premiere this weekend, and there were plenty more screenings and events being held in New York as part of the festival which is partly put together by Robert De Niro. He was at a handful of the events, and was spotted hanging out with Juliette Lewis and Vince Vaughn. Kirsten Dunst premiered a short film she directed, looking relaxed in a floaty dress, Naomi Watts and Liev Schrieber kept their shades on for the premiere of Every Day, while British actress Archie Panjabi attended the premiere of The Infidel alongside David Baddiel. Other celebs spotted included Miranda Kerr, Bono, Christy Turlington, Guy Pearce, James Van Der Beek, Andy Serkis, Selma Blair, Alexanda Skarsgard and Rashida Jones. 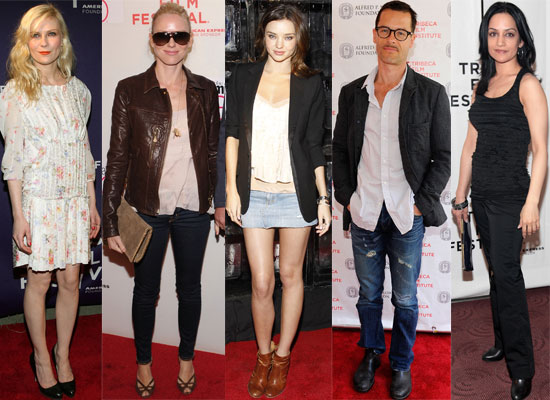