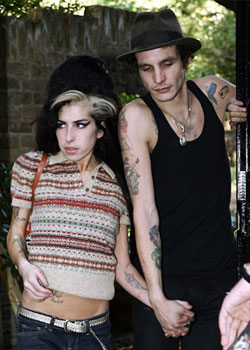 We've been hearing rumours that Amy Winehouse and Blake Fielder-Civil are getting remarried, and now Blake's mother Georgette has confirmed the divorced couple's plans to reunite officially. She told The Mirror:

"Their love is so powerful ­nothing will stop them from ­being together whatever anyone else thinks. They’ve battled their demons and are absolutely off drugs. As soon as Blake finishes his term in rehab he’ll be straight back with Amy in London."

Speaking about the Tiffany engagement ring Blake gave Amy for their first marriage, and which Amy has been spotted wearing, Georgette said:

"It’s the same ring, the same Amy and the same Blake. They never stopped ­loving each other and have spoken every day through the divorce. They talk about how they felt lost until they found each other again. They aren’t jealous about what they got up to during the split and they don’t go over the past."

To find out what Blake told Georgette about reuniting with Amy, just read more.

"Blake told me, ‘Mum, you know she’s the love of my life and we’re back together’. I knew deep down they’d been back in touch so it wasn’t a huge surprise. Blake told me they both felt pressured into the divorce and that it was just a piece of paper. It meant nothing else. They have both told me they feel like the other side of the coin to each other."

What do you think of Amy and Blake's plans to marry?