Amy Winehouse left her home this morning to attend Westminster Magistrates Court to face charges of common assault with her dad Mitch — she's alleged to have attacked a fan at a charity ball in London back in September 2008. Amy pleaded not guilty to the charges and the case has been adjourned until July 23. 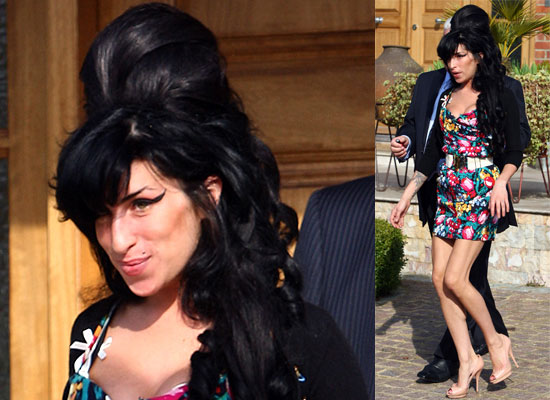 Though she's showing a lot of skin for a court appearance, Amy's certainly looking healthier Spring appropriate in her flowery dress and nude shoes. Mitch has also been speaking out about Amy's marriage to Blake Fielder-Civil, saying:

“Amy wants to resolve the situation. She’s guilty of loving him, stupid girl. I’m not saying she is going back to him, she just wants to talk. But I want her to get divorced. I want Blake and his family out of our lives. It’s the only chance Amy has. She nearly ended up dead thanks to him.... He’s after £5million. Does he think we’re idiots? Amy’s a musical talent, but since she’s been with Blake she’s barely been able to perform on stage, let alone make a record.”

Do you have the same opinion on Blake and Amy?