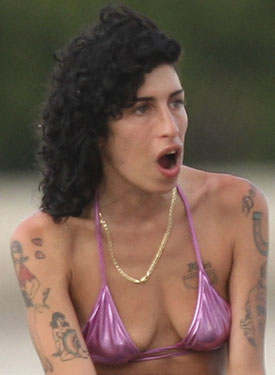 Amy Winehouse has reportedly written a song she has called "The Ultimate Betrayal" following reports that another woman is six weeks pregnant with her estranged husband Blake Fielder-Civil's child.

After she heard the news, Amy reportedly went to her studio on St Lucia and wrote the emotional song, which repeats the "No, No, No" line from "Rehab". A source said:

"Amy still felt they had something between them and that one day they’d be together again. But this news destroyed her. She sat down with her guitar and started writing 'The Ultimate Betrayal'. She keeps repeating the line: 'Blake a baby, no, no, no.' It’s very haunting."

The News of the World is claiming the exclusive that Blake "had a secret fling" with Gilleen Morris in rehab in February. Gilleen claims that Blake has vowed to stand by her and raise the child, and also said: "if Amy wants to be a stepmum I wouldn't mind, as long as she steered clear of drugs and self-harming". The news could affect Blake's plans to receive £5million of Amy's fortune in their divorce, as his case was based on Amy's alleged infidelity.