Ashton Kutcher, Jessica Alba, and Emma Roberts headed to London to walk the red carpet at last night's European premiere of Valentine's Day. Demi Moore was on Ashton's arm after joining him for photos at Monday's LA screening, where his costars Jennifer Garner, Jessica Biel, and Anne Hathaway celebrated the star-studded film. Jessica and Jennifer are currently in NYC promoting the movie with interviews individually and together, while Anne stayed behind in California to make the party rounds. Ashton had time to stop by The Jay Leno Show to joke about Jay's whole fiasco being a huge, late episode of Punk'D, just as we got a first look at his project with Katherine Heigl, now called Killers. 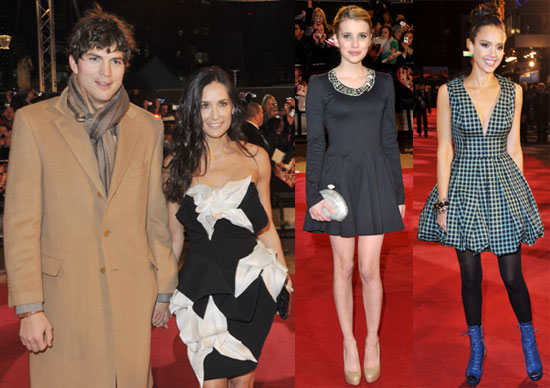 More photos from the London premiere, so read more.