Beyonce is in London for the UK leg of her tour and she's been partying all over town this weekend with Jay-Z and the JLS boys. On Friday she wore a white and silver dress at Kanaloa with the guys, and last night she wore an all-black ensemble at Whisky Mist after her concert at the O2, where she was joined on stage by Kanye West and Jay-Z, and she's brought so much luggage with her that she's reportedly had to book a hotel room just for her bags! At the club last night Beyonce helped Aston Merrygold, Marvin Humes, Oritse Williams and JB Gill celebrate their album beating Robbie Williams to number one spot. The sweet moment followed a devastating day for the lads, when a number of their fans were crushed as they performed at Birmingham's Christmas lights switch on. We wish a speedy recovery to those who were hurt. 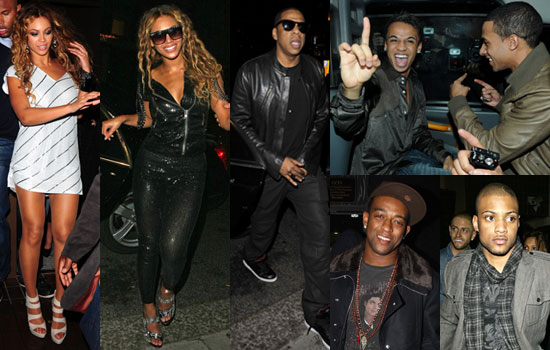