The stars brought out the glamour last night for the 40th NAACP Image Awards at the Shrine Auditorium in LA: vote on all the red carpet looks here. Seal sang after Cosmo cover girl and Female Artist winner Beyonce opened the show, while Jennifer Hudson performed for President's Award winner Muhammad Ali and was named New Artist, saying: "This is where we come from. So it's always an honor to come home and feel welcome and to feel the love. I really cherish this and appreciate it." Halle Berry had a few costume changes as host for the night, and a winning Will Smith was buddies with everyone from Chairman's Award winner Al Gore and TV Movie Actor recipient Diddy to the team behind The Secret Life of Bees. To finish, Stevie Wonder took to the stage to bring an inspirational end to a great evening. 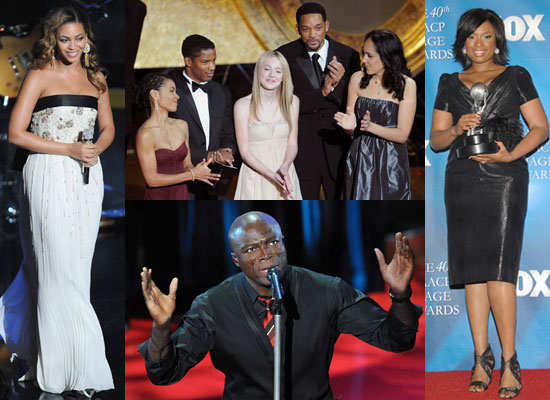