Hot new couple Bonnie Wright and Jamie Campbell Bower were at InStyleUK's Best of British Talent party with Lancome at Bar Music Hall in Shoreditch last night. The Harry Potter costars are part The Brit Pack in the magazine's March issue, alongside Rupert Grint and Dev Patel: check out behind the scenes footage of the shoot after the jump. Several other bright young things joined the fun at yesterday's party. Models Amber Le Bon and Ben Grimes were DJs, and The Saturdays, Rachel Stevens, Konnie Huq and Zoe Salmon partied alongside Jonathan Ross and Jimmy Carr, who tweeted pictures of his new BFF Kimberly Wyatt. Hopefully we'll see Bonnie and Jamie walk the red carpet together at the Oscars, as his film Winter in Wartime is in the running in the Foreign Language Film category. I'm excited to follow Jamie's career and so are you guys, as he's the male star you want to see more of in 2010. 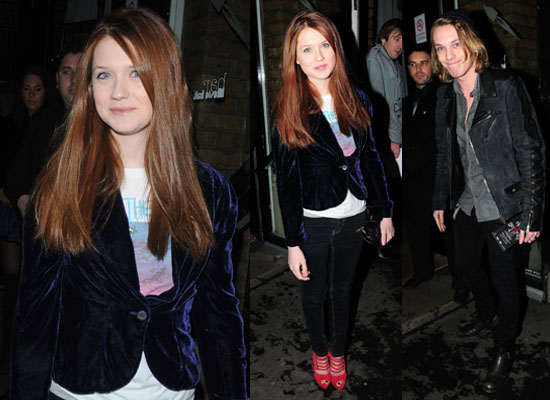 To watch behind the scenes video footage of the special issue shoot, and to see more pictures of Bonnie and Jamie plus the other partygoers, just read more.