Stars of the big and small screen got glam for the People's Choice Awards in LA last night. Carrie Underwood won three awards, and Paris Hilton and Jewel won me over with their pretty dresses. Nominees announcer Joshua Jackson wasn't in attendance unfortunately, but there were lots of other gorgeous guys to feast our eyes on. 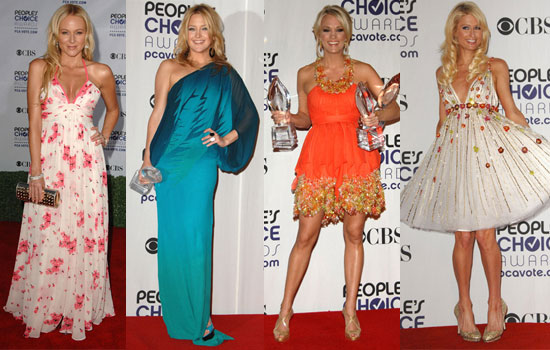 Our very own Christian Bale picked up a couple of gongs thanks to The Dark Knight's huge success. Other British winners included Favourite Male TV Star Hugh Laurie, and Paul Bettany whose film The Secret Life of Bees picked up two gongs, while Gavin Rossdale presented Kate Hudson with her award. My girl Buzz has got the full winners list, Fab and Bella have polls on all the fashion and beauty looks, and BellaUK wants to know whose nude lips do you like the most?