Coldplay brought their world tour to a close this weekend with two rocking shows at Wembley Stadium, and I was lucky enough to be there. Chris Martin and the boys were supported by White Lies, Girls Aloud and a record-breaking Jay-Z, who really got the audience going: watch Girls Aloud's "The Promise" and Jay-Z's "Empire State of Mind" after the jump. Coldplay performed a mammoth set of their hits, plus an acoustic version of "Billie Jean" where they were joined by Simon Pegg who played the harmonica, and Jay-Z came back out for "Lost". Chris was energetic as always, showing off his impressive flexibility, and his playful mood was in full force as he got the 60,000 strong crowd to perform a Coldwave — a Mexican wave with mobile phones (check out an example after the jump). In honour of Cheryl Cole, the band also set up an X Factor-style audition with Simon Cowell on the screens. What an awesome show! 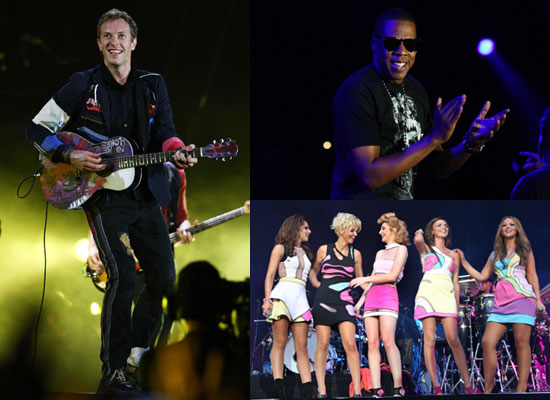 Coldplay "The Hardest Part", "Postcards From Far Away" and "Viva La Vida"