Coleen Rooney wore a leopard print bikini on the beach in Barbados, as she continued to enjoy her holiday with baby Kai and family at their £5million villa. Hubby Wayne has had to miss out on his son's first holiday, as he's been busy helping Man Utd win various games, including the Carling Cup, and he's also been dancing with James Corden in aid of Sport Relief: check out the hilarious video! While several WAGs have reportedly booked accommodation in South Africa close to their partners during the World Cup, defying Fabio Capello's instruction that they not stay near the England squad, Wayne has revealed that Coleen isn't one of them, saying: 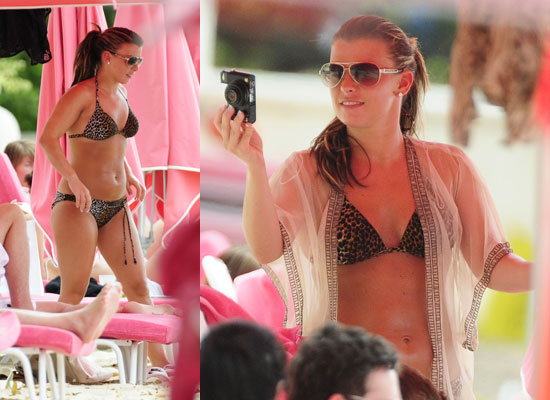 "If they want to come and support us there's nothing stopping them," he said. "Last time we were all together in the hotel and that was a bit of a problem. My wife's just had a baby so she's not going anyway."