David Beckham left the football pitches of Milan to travel home and meet with Gordon Brown alongside his fellow sports stars Andy Murray and Denise Lewis yesterday. They were at 10 Downing Street to mark the launch of the Malaria No More UK campaign, as the trio are members of the leadership council of the campaign group. Gordon Brown promised to send 20 million malaria nets to Africa, and the UK has already delivered 9.7 million. David said: "It's truly incredible to think we can stop this killer disease forever and it's such a simple thing to do. For less than a cost of a football you can protect a family from dying." He added: "I urge the UK public to get behind the Malaria No More UK campaign to save a life and make malaria no more". It's so great to see these stars getting behind such important work. 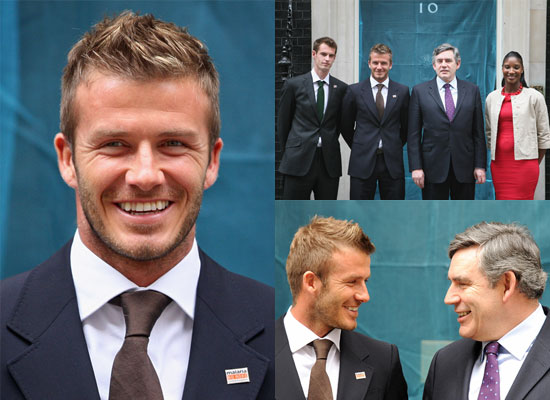 To see pictures of David and the gang inside 10 Downing Street, just read more.