David Beckham is back in the UK and was spotted training with his England team mates at London Colney yesterday, after getting shirtless at the weekend to reveal his new tattoo following AC Milan's game in Italy. England face Egypt in a friendly this evening, and rather than playing against Manchester United David will be on the same side as his former team's players, who have had fun off the pitch in an aerobics class with James Corden for Sport Relief! While David showed off his high kicking skills, John Terry and Wayne Rooney giggled together as they stretched. There'll be WAGs at the match tonight, but there won't be as many watching their boys in red in South Africa for the World Cup, as Coleen Rooney is not going and Steven Gerrard has revealed his wife Alex Curran won't be there either. 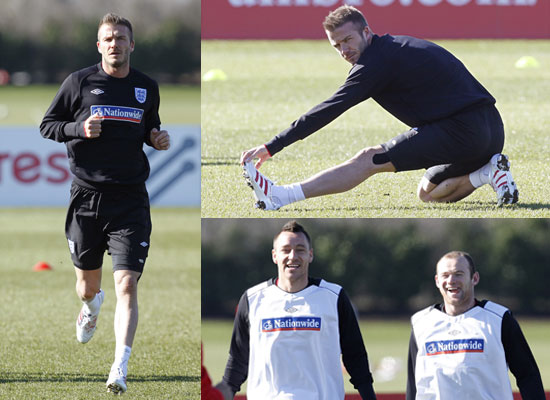