David Beckham left Finland with Victoria and flew back to the UK yesterday after his successful Achilles tendon operation on Monday. His spokesman said David will stay in London for a few days before returning to Los Angeles to continue his recovery, with his leg in a cast for up to a month and then in a support for another three to four weeks. Becks' LA Galaxy team mates have offered him their support, following Carol Ann Duffy's tribute poem and Gordon Brown's well wishes. Although his injury means David can't play for England in the World Cup, he will reportedly join the team in South Africa this Summer and assist them from the dugout. Becks has made another statement, this time thanking his club: 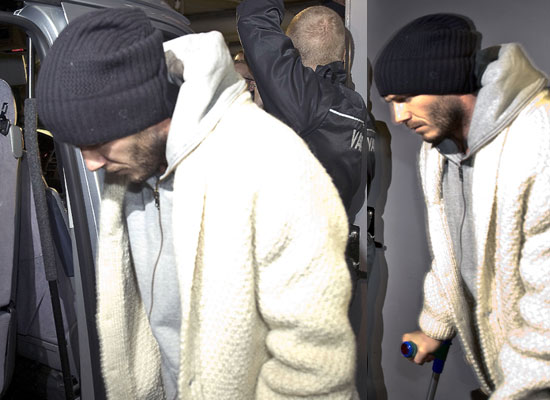 "I have appreciated so much all the messages I have received after the injury. I want to thank from my heart all the Rossoneri. The club, the doctors, my team-mates and the fans. I truly thank you, the members of Milan, for what they have done for me."