David Beckham finally returned to his beloved Old Trafford as AC Milan played their second leg Champion's League match against Manchester United. Having lost the first leg in Italy, David's team also lost the game last night 4-0, but Becks still smiled as he waved from the stands and applauded the crowd, who gave him a standing ovation as he took to the pitch in the 64th-minute. After chatting with his England team mates, David bundled up in a scarf and hat as he flew back to Italy. Before the game Becks said it would feel like coming home, and after the match he spoke about the fan reception, his support for Man Utd, Wayne Rooney, and his controversial move in wearing a green and gold scarf. Here are highlights: 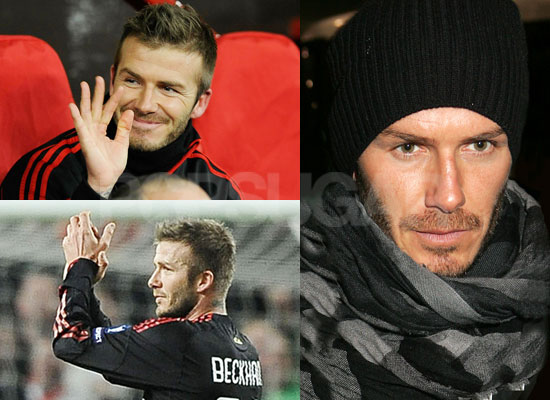 To find out what Becks said about wearing the green and gold scarf plus his admiration for Wayne Rooney, and to see more pictures of David on the pitch, read more.