David Beckham grinned big as he shook hands with his former Manchester United team mates at the San Siro last night. After the match he even signed shirts for Gery Neville and Paul Scholes' children! AC Milan lost the Champions League first leg 3-2, with Wayne Rooney putting aside his off-pitch legal troubles to score two goals. However, David was upbeat about Milan's chances in the second leg at Old Trafford next month, saying: "It is not over. We can win 2-0 in Manchester and that would be a normal result." Becks spent time with family last week, but missed out on Valentine's Day with Victoria as she was at New York Fashion Week. I'm sure it won't be long until one of my favourite couples will be together again. 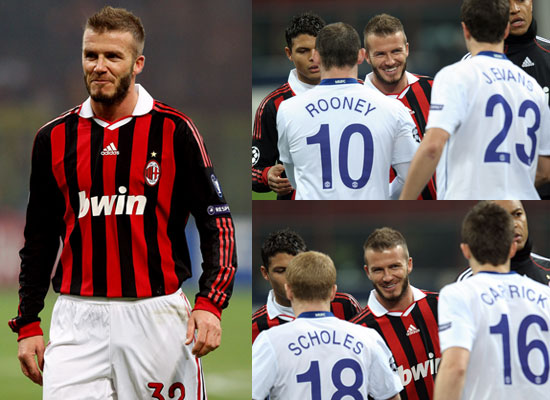 To see more pics of Becks, Wayne and the Man U team, just read more.