David Beckham performed his day job on Saturday, playing against Fiorentina with AC Milan at the San Siro, before enjoying a meal with Victoria at Nobu Armani in the evening. Victoria wasn't the only fashionable face pitch side, as Domenico Dolce and Stefano Gabbana were in the stadium, cheering: "Beckham! Beckham! Amore! Amore!" Although Victoria had cheered on David from the stands, the new Armani lingerie model was surprisingly absent from his side when David swapped football for fashion at the Armani Menswear show at Milan Fashion Week on Sunday. David had shopping buddy Roberta Armani for company, as well as Giorgio, and he told WWD: 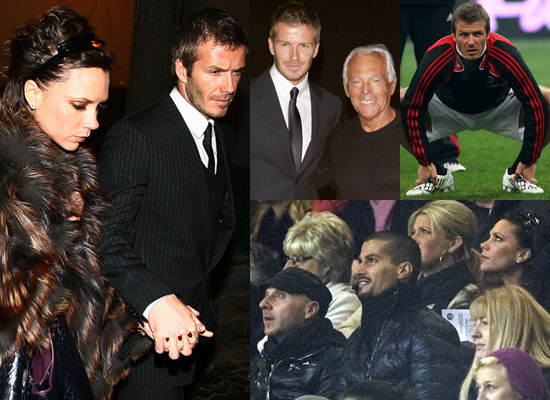 "The club, players and fans have been amazing to me so far and have made me very welcome. It's rare I have time to make a show so I enjoyed it... My priority though is working hard and playing well for AC Milan."

It's great to see David and Victoria really enjoying his time in Milan.

To see lots more pictures of David on the pitch and with the Armanis, read more.