David Beckham received a red card in the 17th minute of LA Galaxy's match against Seattle Sounders at The Home Depot Center in Carson, California on Saturday. He was sent off to boos from the crowd for fouling Peter Vagenas during Galaxy's 2-0 defeat, but Becks defended his actions by saying: "Pete is one of my best friends. I think it's a hard tackle but not with means for a red card. I've never gone in one tackle wanting to hurt someone. The referee saw it differently." While David's getting grief on the pitch, Victoria's reportedly getting an offer of £3million to become a full-time American Idol judge, providing she's popular with the audience and they don't think she's too slim or difficult to understand. It sounds like David's finding his actions on the pitch aren't understood, do you think the US audience will understand Victoria? 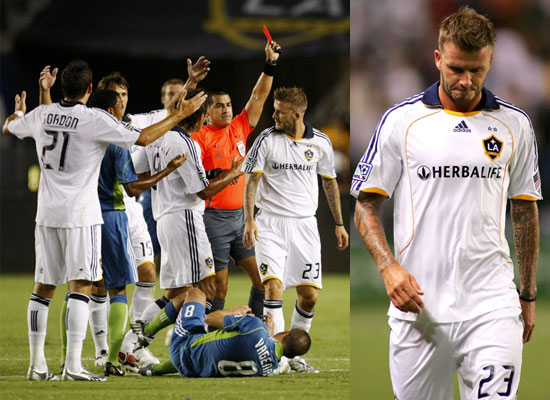