David Beckham was back at LA Galaxy yesterday for a kickabout with his teammates after spending the last off season on loan to AC Milan in Italy. He also spoke to the press about his future in the sport — he's currently two seasons into a five year contract with the Los Angeles based squad. Reports suggest that he'll be looking to play for another team during the next off season starting January 2010, but who? When he left Man U in 2003 he said that he'd never consider playing for a English club other than United, however yesterday he said: 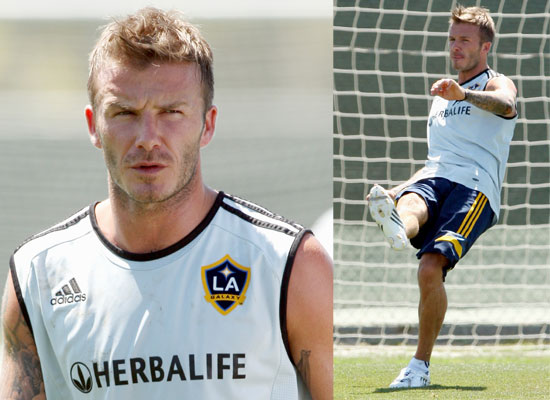 "Never say never. I would definitely consider it. When I left my heart was in Manchester — I couldn't see myself playing against United. Now I wouldn't rule it out."

But he also stressed that AC Milan is the squad he's most likely to return to during off season, and in the meantime he's completely committed to his team in LA. Shame, we'd love to see more manjoyment thanks to Becks back playing on British soil!