David Beckham brought manjoyment to the Rose Bowl Stadium in Pasadena as he stripped off his shirt following Los Angeles Galaxy's 2-1 defeat against FC Barcelona on Saturday. Arnold Schwarzenegger certainly sees David as a selling point for tourism to California, as the Governor will star in TV ads promoting the state alongside David and Rob Lowe. David isn't convinced the LA Galaxy supporters are behind him, however: he scored their only goal from his free-kick, but when asked whether it would help get the fans on his side, David said: 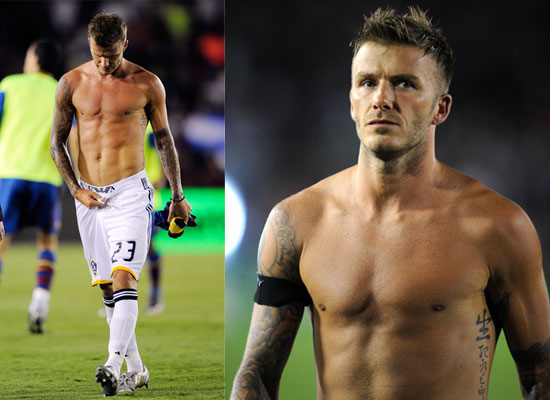 It's always a pleasure to see David showing off his hot body, and I'll be finding out which shirtless Brits you think are sexy in my shirtless slideshow poll, so stay tuned!

Loads more pictures of David in all his shirtless glory, so just read more.