David Beckham looked happy as he trained with Shaun Wright Phillips and the rest of England team at London Colney in St Albans on Friday, but he didn't get to play a part in the side's 2-1 defeat of Slovenia in a friendly match at Wembley on Saturday. He'll be hoping to come on to the pitch for Wednesday's World Cup Qualifier against Croatia, and he's also expressed he desire to lead the Great Britain squad at the 2012 Olympics in London, saying: 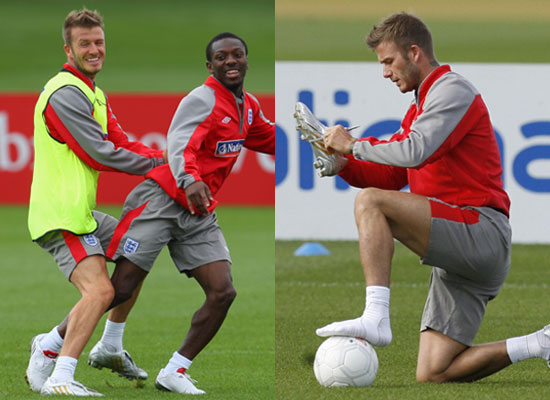 "I was very proud to play a part in bringing the Olympics to London. It was such a great thrill when we were awarded them so to go on to be a part of 2012 itself will be just terrific. I would certainly love to be involved with the GB football team. Obviously, I would be very much an 'older' player by then but I definitely want to be involved there in some capacity."

With reports suggesting David has already finalised his return to Milan in January 2010, it looks like he'll be spending a lot more time in Europe in the coming years.