David Beckham showed off his muscly legs and tattooed arms as he prepared for AC Milan's match against Roma in Milan on Sunday. Becks has been chatting about his body, but in typical fashion he showed how modest he is, saying: "The doctor that gave me the physical when I went there [to Milan] said there’s no reason I can’t play until I’m 40. He said my body is in the same kind of condition as Paolo [Maldini]'s. I said: '40? Really?'". With David's fitness as good as that, it's no wonder Milan's coach Carlo Ancelotti wants to take Becks with him to Chelsea. Regardless of where he's playing, David still finds time to support his country and support good causes, with his advert for the Malaria No More campaign released today. 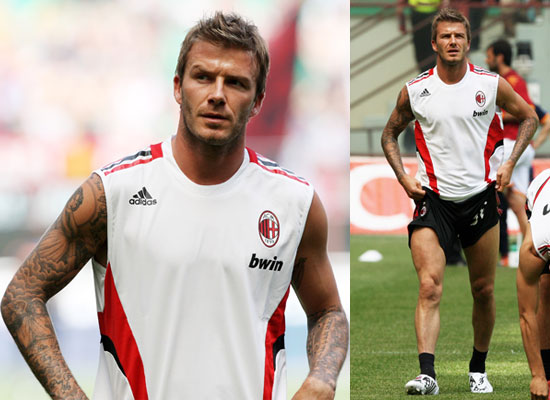