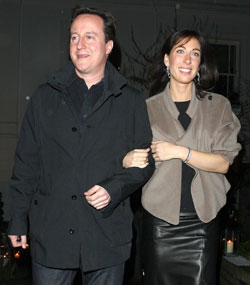 Conservative Party leader David Cameron and his wife Samantha have announced they are expecting their fourth child. A Conservative Party spokesman confirmed: "The baby is due in September and David and Samantha are completely thrilled."

David took part in the Sport Relief mile over the weekend, while Samantha told reporters yesterday she was "very, very delighted as you can imagine", adding that she is already suffering from morning sickness.

Steve Irwin
Bindi Irwin Re-Created a Sweet Moment From Her Parents' Pregnancy, and It's So Touching
by Yerin Kim 3 days ago