The Empire Film Awards took place in London last night, with a bevy of British acting talent attending to present and collect trophies. Best newcomer Gemma Arterton posed playfully for the photographers as she arrived, and there were some classic but unique black outfits from Joanna Page, Anne Marie Duff, Hayley Atwell, Helena Bonham Carter,Georgia Groome and Olga Kurylenko — FabUK wants to know who your best-dressed of the evening is! 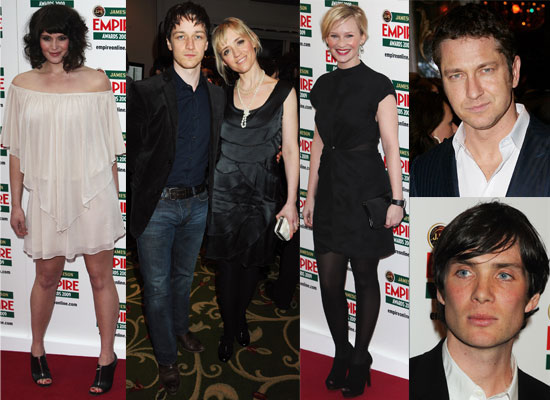 The gorgeous Cillian Murphy, Gerard Butler and James McAvoy were just a few of the men adding some manjoyment to the occasion, alongside Jim Sturgess and Viggo Mortensen. The Dark Knight was the big winner of the evening with best film, director and actor as well as a special tribute award going to the late Heath Ledger.

To see more photos from the Empire Awards, as well as a full list of the winners just read more.