The British Comedy Awards took place on Saturday night, with Angus Deayton taking the place of usual (suspended) host Jonathan Ross. Russell Brand won the award for Best Live Stand-Up act and dedicated his award to Jonathan in a video acceptance speech alongside Adam Sandler. Russell managed to not be the most controversial headline grabber of the evening — that debatable honour went to Alan Carr, who dedicated his Best Comedy Entertainment Personality award to Shannon Matthews' kidnapper mother Karen, but has since apologised. 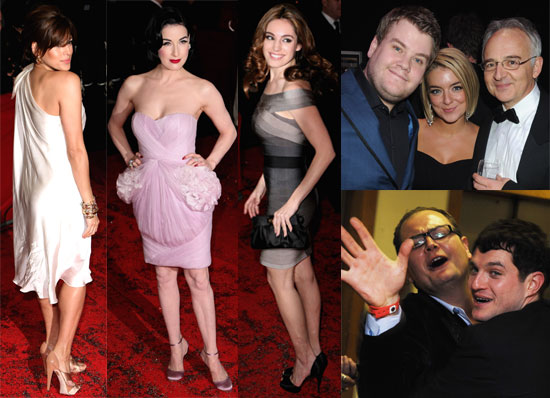 As well as the controversy-baiting boys we were treated to James Corden and Mathew Horne walking the red carpet together, with James posing inside with his close friend and costar Sheridan Smith. There were also plenty of other glam ladies at the event like Eva Mendes, Dita Von Teese, Kelly Brook and Lucy Davis. My girl FabUK wants to know if you love or hate Dita Von Teese's pale pink red carpet look, so let her know!

To see a full list of winners and many more photos from the red carpet and inside the British Comedy Awards 2008, including Alec Baldwin, Juliette Lewis, Graham Norton, Anthony Head and more, just read more.

There's even more coverage over at InStyle UK!