Take That are still touring around the country, playing to some huge audiences, and last night I was one of the lucky 80,000 people at Wembley Stadium to see the band as they finally brought their The Circus: Live show to the capital! Along with their hits, and some dance routines they did in the early 90s, the boys had an incredible number of dancers and gymnasts bring the circus theme to life and did it all in the absolutely sweltering heat that we're being treated to at the moment in the UK. These new photos from last night's show expand on the amazing clown photos from the beginning of the tour, with a detailed glimpse at the spectacular elephant that transports them from the stage in the centre of the arena to the main stage, and the ringmaster and fire that make up the stage set for "Relight My Fire". Have you seen this show live, or are you seeing them this week? Let me know! 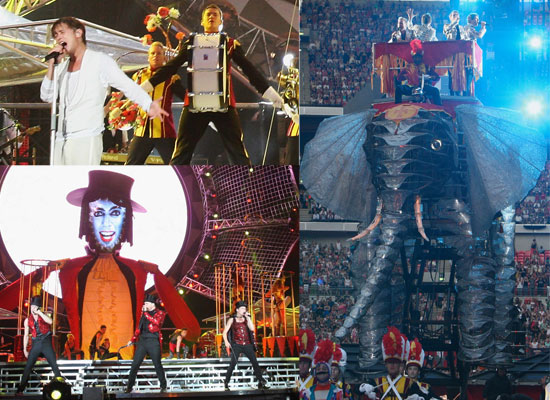