After eating bugs and arguing with David Van Day on I'm A Celebrity, Nicola McLean is back in the UK doing what she does best. The glamour model posed alongside Father Christmas in Ultimo's new Red Boudoir lingerie range at Oxford Street's Debenhams store yesterday, before moving on to Romford's Debenhams to show off yet more of the underwear company's wears. It seems that bras have come in handy in the education of her son, as Nicola has told Richard and Judy she uses bra sizes to teach the alphabet to her two-year-old, Rocky. Nicola also spoke about her spat with Jordan during the interview, which aired on Watch last night, saying: 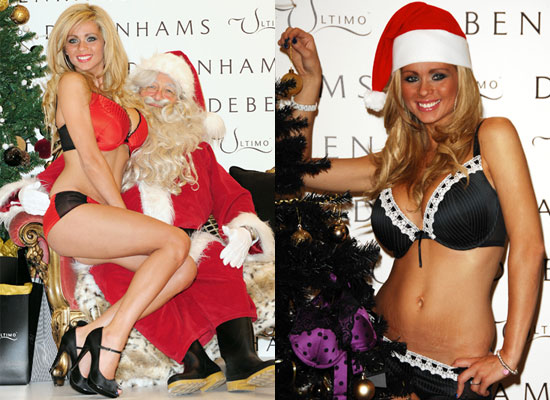 "I went into the jungle thinking that Jordan was an icon, an absolute legend, she's amazing and I've come out and seen that she's gave me the absolute worst press and it's just so sad really."

This could turn out to be another one of those long-running feuds. Sigh.

To see more pictures of Nicola posing in her lingerie with Santa, just read more.

ChristmasNicola McLeanI'm A Celebrity Get Me Out Of Here2008 Christmas