Taylor Lautner took a break from all those smart suits he's been wearing for premieres and TV appearances and benefit screenings, and wore a casual stripy top and jeans for dinner at BLT in New York City last night. I was lucky enough to meet Taylor when he was in London last week for the New Moon press conference and UK fan event and he revealed all about stunts, hobbies and taking on a female role! Check out all of the gossip from Taylor, Robert and Kristen in my series of interviews and read on to find out more from Jacob Black himself. 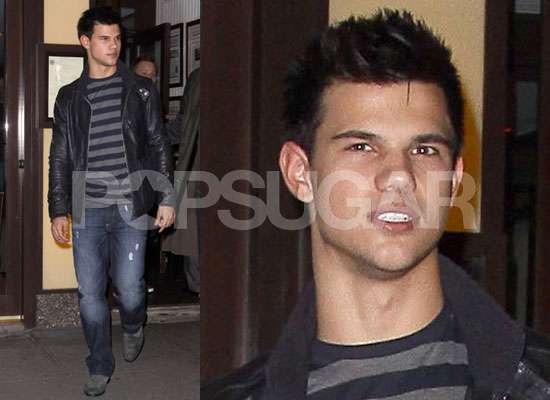 To find out what Taylor had to say about how he spends his downtime, how he feels about the fans, and his interest in playing a female character, just read more.

Taylor dressed as Bella is something I would love to see! He also told me all about how he got his hot body through exercise and an extreme eating regime, and chatted with Molly too. Remember to read all my cast interviews and check out my review of the film.