The G20 leaders, including Gordon Brown and Barack Obama, gathered for a reception hosted by the Queen at Buckingham Palace yesterday before heading to 10 Downing Street for a meal prepared by Jamie Oliver. Michelle Obama, in another great outfit from her warbrobe, dined with Sarah Brown at No. 11 with the other partners and British stars including JK Rowling, Naomi Campbell and athletes Kelly Holmes and Tanni-Grey Thompson. Jamie, whose menu included salmon from Shetland, lamb from north Wales, and a Bakewell tart and custard, said: "I'm very, very proud of my country and its food traditions and I know that the guests at Downing Street will be in for a real treat." His wife Jools was due to give birth yesterday, but fortunately she didn't go into labour so Jamie didn't have to rush from the banquet to her side. 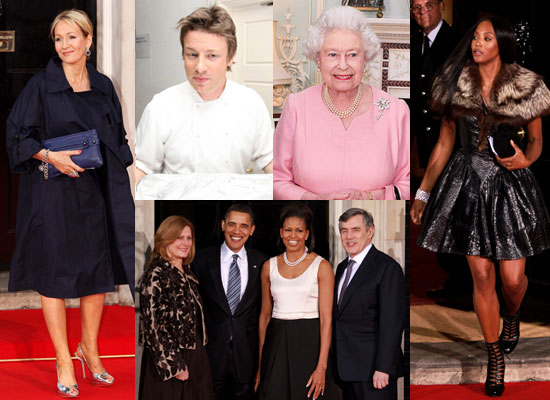 To see more pictures of the guests at Downing Street and Buckingham Palace, just read more.

The Royals
Princess Eugenie Shares a Sweet Tribute to Her Grandpa, Prince Philip
by Tori Crowther 14/4