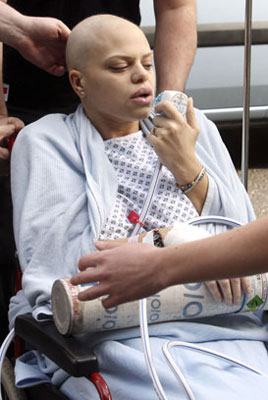 Following her bowel operation earlier this week, Jade Goody is surrounded by loved ones and has reportedly said her goodbyes with Max Clifford saying "she now only has a short time to live".

After being convicted of assault, Jack broke his curfew on compassionate grounds and spent Tuesday night by Jade's side, comforting her and apologising. He said:

Max Clifford has commented on the media coverage and his role in Jade's decisions, saying:

"My attitude to Jade in recent times is: 'Don't you think enough is enough? Don't you think you've got the message out there? The money that you wanted for the boys we've done, we've made, it's in place, the money is assured' [...] The reality is there is a balance because there's huge public interest and an appetite and support for Jade, which is reflected by the fact that it's front page news virtually every day. So much of it has got to be guided by her because it's her life and it's for her to decide. But of course if she's not well enough to make that decision then I will make that decision for her automatically."

Our thoughts are with Jade and her family during this heartbreaking time.