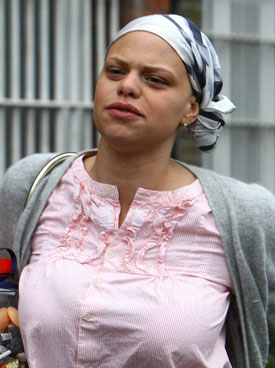 Jade Goody has been told by doctors that she only has months to live. Her cancer is so advanced that all the doctors can do now is make her as comfortable as possible in the final stages of her life.

"She was informed yesterday that tragically, she's terminally ill. She was obviously devastated... It's a question now of when and not if."

After being given the news yesterday, Jade's boyfriend Jack Tweed proposed to her at her bedside in hospital.

Magazine coverage of the wedding is being considered, with Max saying:

"We are all hoping for the best but Jade knows she may not have much time left and, to be blunt, she is desperate to earn as much money as she can. It is fair to say that selling the rights to her wedding would be a surefire way of earning a big amount of money."

Jade had already started putting her finances in order and making a will to ensure her sons will be taken care of in the way she would like them to be.

Our thoughts are with Jade and her family at this heartbreaking time.