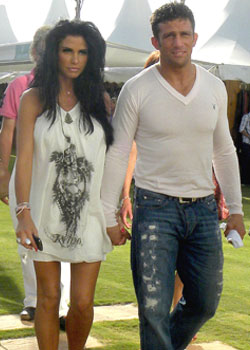 Following her shock departure from the jungle, Katie Price had another surprise up her sleeve last night, as she announced during her interview with Ant and Dec on I'm a Celebrity she has broken up with Alex Reid. She's not showing any signs of regret yet, as she tweeted late last night: "I feeeel sooo goood today".

Kate didn't explain exactly why she had broken up with Alex, other than saying she's done a lot of reflecting and said: "I think that it's best I'm on my own. I just don't want to be in a relationship." In the show's sister programme, we saw the moment Kate met up with her pal Michelle Heaton for the first time after leaving the jungle, and Michelle told her about Alex's plans to propose and recommended that Kate dump him.

To find out what Peter Andre's been saying about Kate on the show, just read more.

Peter Andre claims he hasn't been watching the show, but news will surely have reached him about Kate's big decision. Kate also admitted that she'd been a "twit" over the last seven months, and apologised to anyone she'd hurt. It certainly sounds like she's done a lot of reflecting, so let's hope she's happier now that she's made these choices.