Katie Price and Alex Reid partied at Movida on Saturday night, celebrating Alex's cage-fighting victory earlier in the evening. Kate wore a heart-shaped ring on her left ring finger, leading to speculation they're engaged, but she is a fan of the bling so I'm not reading too much into it yet. Peter Andre, meanwhile, appeared on Friday Night With Jonathan Ross but didn't reveal much more about their divorce: watch the interview after the jump. Following Kate's revelation she was raped, more details emerged over the weekend, while Kate spoke about the reason behind her split with Pete in an interview with the News of the World's Fabulous magazine, saying: "Jealousy killed my relationship". She also spoke about Alex's influence on her fitness, whether Pete still loves her, and how she can never trust men. Here are the highlights: 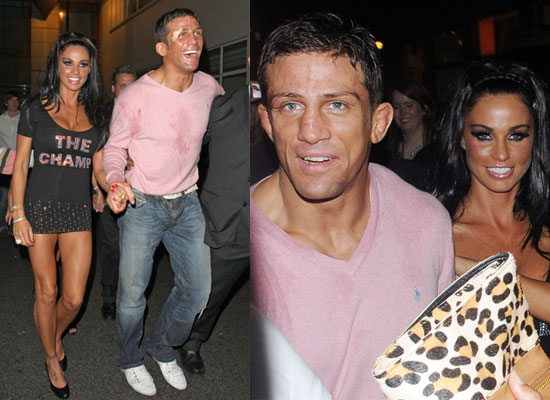 To find out what Katie said about Alex and her new fitness regime, and to watch Peter's interview with Jonathan Ross, just read more.