Katie Price arrived back at Gatwick Airport yesterday kitted out in her riding gear, holding hands with Alex Reid. While the couple spent the weekend in Spain, allegations Alex was starring in a porn film surfaced, and now there are rumours Kate is pregnant and getting married, which she has already denied on Twitter. Kate's also defended kissing Alex in front of her children, writing in her OK! column: "I don’t know why people made such a big deal about me spending such a beautiful day in the park with Alex, the kids, mum and friends. Madonna and Kate Moss snog their men in front of their kids and aren’t criticised for it – it’s not like I’m with a different guy every week, I’m in a relationship!" She added that, having watched Peter Andre's documentary, "he didn’t seem to be in the right state of mind to film". Pete's certainly not in a great state of mind at the moment, telling New! magazine: "I’ve had a couple of really bad days in the last week or so". New! has also interviewed Alex — here are the highlights: 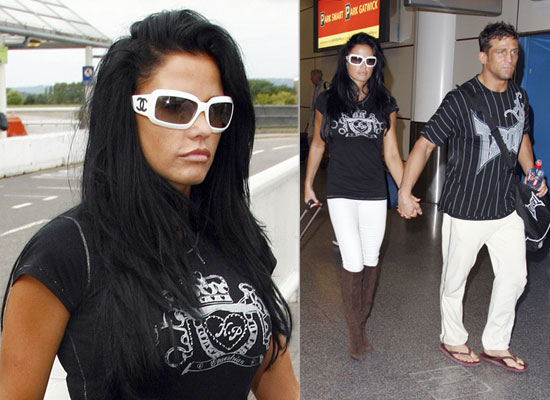 To read what Alex said about the Katie/Jordan divide plus their plans for the future, and to see more pictures of Kate and Alex at the airport, just read more.

What do you think of Alex's interview?