Jordan/Katie Price spent the weekend signing autographs at The British Open Show Jumping Championships at Birmingham's LG Arena, but she couldn't get on horseback herself and compete due to a knee injury. Kate was due to take on Gladiator's Siren aka Amy Guy in a celebrity polo contest, but had to settle for pictures with her competitor instead. She's still making waves in the horse world: after rumours suggested she was good friends with Zara Phillips and planned to attend the Gatcombe Park show with her later in the year, Zara's rep denied the story. As well as that embarrassment, Kate's feeling the recession too, saying: 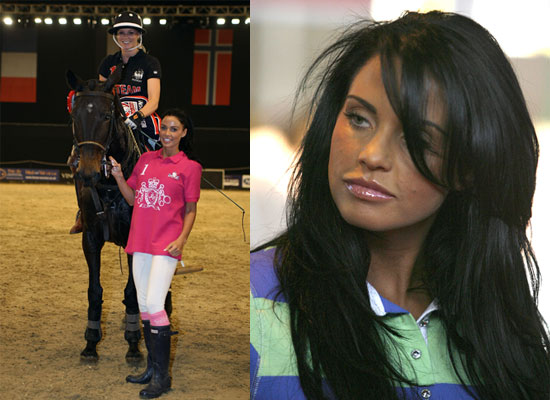 "We haven't got a stylist anymore. We've got enough clothes, so we'll do it ourselves. I just get my hair blow-dried, and I can do my own make-up. There's a recession, why waste money? I'm not a big spender anyway."