Katie Price visited her divorce lawyer yesterday before heading to the Mayfair Hotel, matching her bright pink bag to her neon nails: do you love or hate them? Her new spokesman explained Kate pulled out of her interview with Jonathan Ross because she's "not ready to talk that publicly". In another OK! column, Kate writes about her birthday party, upcoming catwalk appearance and next novel, Sapphire, but while work is going well, her personal life gets messier. Big Brother's Billi Bhatti claims they had a "cyber-affair", but Kate's spokesperson has dismissed the claims as "totally nuts – absolute rubbish". Kate's ex-boyfriend Dane Bowers is also causing problems, claiming he was with Kate after police found him next to a crashed car outside Kate's house, so she will be questioned by police to confirm his story. 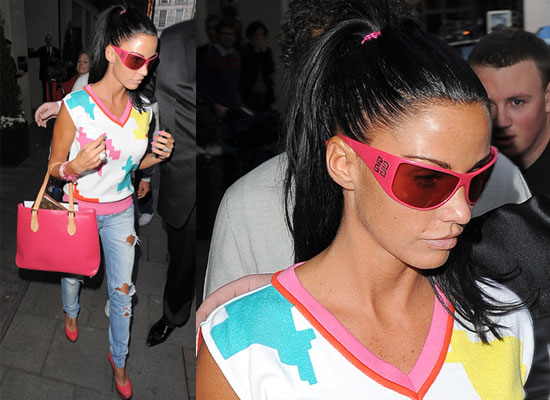