Katie Price gave her classic Jordan poses at athe launch of her new novel Sapphire at Selfridges in London yesterday, surrounding herself with male models including her Ibiza companion Anthony Lowther. The good times soon turned sour, however, when Kate discovered Peter Andre has decided to sue her . Kate appeared on GMTV yesterday (watch the interview after the jump) and discussed the possibility of Pete's infidelity. She said although she "hears things" as far as she knows he was faithful, but the negative hints have led his lawyer to confirm he is taking legal action over her comments. With her new book, the chance to star in the UK Baywatch and a possible cameo in the Sex and the City sequel, Kate's professional life is still going strong, even if her personal life continues to unravel. 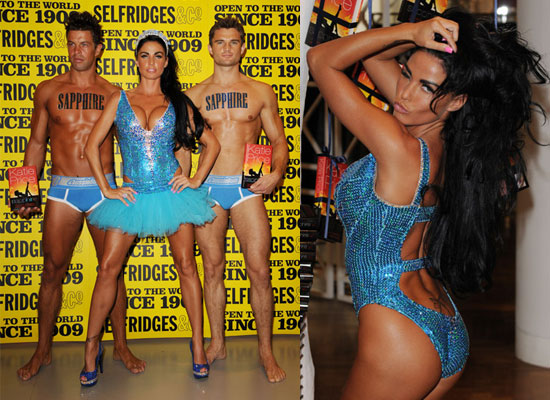 To see Kate's interview on GMTV, plus more pictures of Kate doing her thing, read more.